HISTORY OF THE RAILWAY TO INSTOW AND BIDEFORD 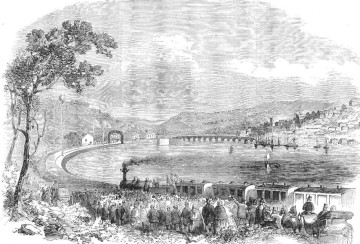 An Illustrated London News drawing of the first train approaching Cross Parks station at Bideford in 1855.

The first track was laid in January 1846 from Fremington to Barnstaple. North Devon's first railway was a goods line operated by horses and was 30 miles away from the "main line" railhead at Crediton. An extension to Umberleigh had started but due to lack of capital the track work was unfinished. In an effort to expand the company repackaged itself as the North Devon Railway and projected a broad gauge passenger and goods line from Barnstaple to Crediton.

The broad gauge line from Crediton to Barnstaple was opened in 1854. The original Fremington Docks line was also converted to broad gauge but still remained goods only. Passenger trains from Barnstaple to Crediton continued over the Exeter & Crediton Railway to Exeter St Davids.

When the North Devon Railway was opened to Barnstaple the extension to Bideford was already under construction and completed the next year. The railway was extended from Fremington through Instow to the original station at Cross Parks at East the Water in Bideford.  The Exeter trains to Barnstaple continued to Bideford. The North Devon Railway and the Bideford Extension Railway were amalgamated with the LSWR in 1865. 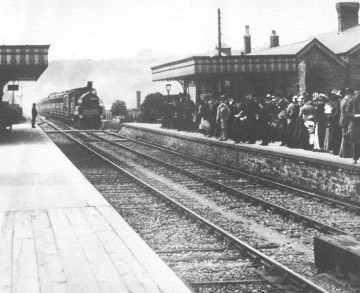 The LSWR reached Exeter Queen Street in 1860. This heralded the beginning of the end of broad gauge in north Devon. Mixed gauge was laid to Bideford in 1863, and the final broad gauge local trains ran in 1877 after which the whole route was changed to standard gauge only. In 1872 the line had been extended as standard gauge only to Torrington and the current station had been built in Bideford. The old station at Cross Parks became the goods yard. 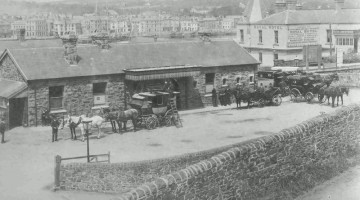 Horse-drawn coaches in the station yard await the arrival of the next train from London in Victorian times. 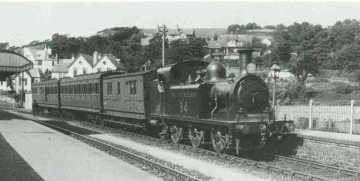 Next stop Bideford! A train from Barnstaple halts at Instow in the 1920s, hauled by an E1r tank engine.

The LSWR became a constituent of the new Southern Railway when the Big Four were formed at the 1923 grouping of the country’s railways.  The first effects in North Devon were the increasing of capacity at Barnstaple Junction station, coupled with through trains from Exeter being routed to Ilfracombe rather than Torrington.

New N Class locomotives appeared on these Ilfracombe trains and the Torrington line was relegated to a branch line, with M7 and E1r tanks working the traffic.  However, through coaches to Bideford from London were continued on principal trains. The famous Atlantic Coast Express was established in 1926.

In 1925 the light railway extension from Torrington to Halwill Junction was opened to serve the ball clay works at Meeth.

By 1935 bus competition was becoming stronger and private cars were more commonplace.  This led to the first railway closure in North Devon: the Lynton & Barnstaple Railway in the September of 1935.

For a few years after the second world war North Devon was graced with the all-Pullman Devon Belle train to Ilfracombe. 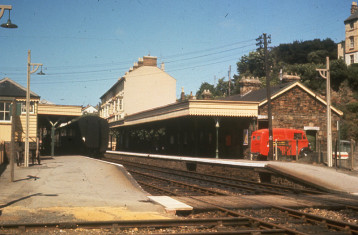 Bideford station slumbers in the early 1960s, waiting for the mail to be loaded into a train bound for Barnstaple Junction.

From nationalisation in 1948 until 1962 there were few changes to the LSWR/SR inherited traffic pattern and practices. The motive power was improved with the withdrawal of aged LSWR designs and their replacement with Ivatt Class 2 2-6-2Ts.

In 1960 the GWR passenger station in Barnstaple was closed to passengers and WR stock started to appear on trains at Bideford station.  In this Indian summer there were few signs of the icy blast that was soon to follow.

In January 1963 the lines west of Salisbury were transferred to the Western Region. In September 1964 the through services, including the Atlantic Coast Express, were withdrawn and most passenger services through Bideford became diesel operated.  However, some of these services were extended through to Taunton. 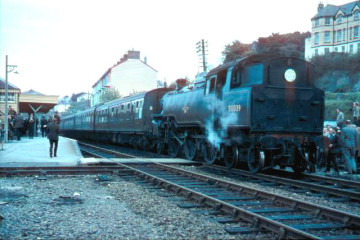 The line to Bideford was a victim of the Beeching cuts and 2nd October 1965 saw the final timetabled passenger working from Torrington to Barnstaple. The last steam train was a railtour called the "Exeter Flyer" on 3rd October 1965, hauled by BR Standard 4MT 2-6-4Ts nos. 80039 and 80043. This train was split at Barnstaple Junction with 80039 on the Torrington portion and 80043 going to Ilfracombe.  However the line remained in use for milk, ball clay and fertiliser traffic.  During the freight-only years there were a considerable number of special passenger trains, ranging from a short-lived working to Torrington when Bideford’s longbridge collapsed, to trips to Devon destinations, football trains and workings to London. Milk traffic from Torrington continued until 1978 and the final ball clay trains from Meeth ran in 1982. 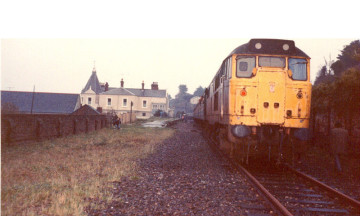 The final passenger railtour, The Last Train to Torrington, ran on 6th November 1982 and the train is seen here pausing at Bideford. The track was finally lifted in 1985 after an attempt to retain a Barnstaple to Bideford service had failed due to lack of finance. It was then that the preservationists at Instow and Bideford slowly began to create the heritage sites that you can see today. Click here to see their story.

We have purchased  the nameplates and numberplate from 34019 "Bideford", bringing them back to the town where they belong.

Thanks to the Bideford Bridge Trust for their substantial grant and to others who made donations large and small.

The locomotive was named by the Mayor, William Chubb, at Bideford station in 1946 and it was scrapped by British Railways in 1967.   The nameplate will be an appropriate companion to the coffee table that was presented to Mayor Chubb at the naming ceremony.  This was donated to the Centre last year.

Photo on this Home Page.

As we come out of COVID the Bideford site will be open from 1030 to 1600 on Wednesdays and Sundays only until September 4th.  Unfortunately we are  unable to open the cafe at the moment.  Instow signal box will be open on Monday mornings.

The Quirky Cafe in the Carriage!  Join us for a selection of delicious food, homemade cakes, local ice creams and hot and cold drinks.  Currently awaiting reopening.