HOW THE PROJECT HAS DEVELOPED OVER THE YEARS. 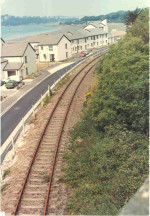 After the Last Train to Torrington ran in November 1982. discussions were held about the possibility of extending the Exeter to Barnstaple passenger service to Bideford.  It was something that BR were keen to do, subject to the appropriate finances being in place. Eventually an agreement was reached that the track would stay in place for two years whilst options were considered although eventually the finances were not forthcoming.

The image to the right shows the line stretching away towards Barnstaple a few months before it was taken up. 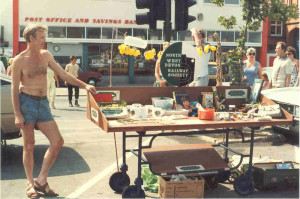 Around this time the North-West Devon Railway Preservation Society was formed with the idea of preserving the branch. In 1985 the Society was informed by BR that the total cost of the line from Barnstaple to Torrington would be £313,000. This comprised of £158,000 for the land and £155,000 for the track. It soon became apparent to the Society that it would not be able to raise such an amount within an acceptable timescale. 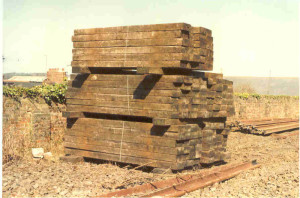 A pile of sleepers on the trackbed at Bideford in 1985 marks the end of the initial preservation attempt.

Later on in the year the Countryside Commission came forward with a grant to Devon County Council, so that the County Council could purchase the trackbed from BR for eventual use as part of the South-West Coastal Path.  Once the purchase had been completed, the County's first phase of trail development was the section from Barnstaple to Bideford.  Consequently the track was removed by contractors during 1985. 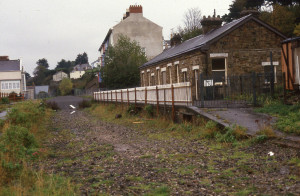 Before the line closed completely a branch of the Midland Bank (later to become HSBC) had been opened in the old down-side station building.  This closed in 1984 but two years later the building was in use again as The Old Station Restaurant who built a fence alongside the platform edge.  This enterprise was shortlived and closed in 1988.

As Devon County County started to develop the Tarka Trail it was apparent that a preservation presence would be welcomed at Bideford.  DCC staff leased the station building as their Tarka Trail offices and the Group worked in partnership with them redeveloping the old site. 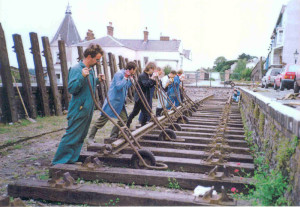 Initially the fence was removed from the platform and the site was tidied.  Then the first major improvement was that the old signalbox pit was dug out and a replica box constructed.

Track was then relaid in each platform and the Mark 1 coach arrived from the Mid-Hants Railway in 1992.

The Group then merged with the Instow Box Emergency Restoration Fund to form the Bideford & Instow Railway Group. 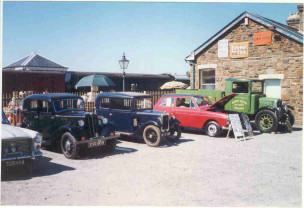 Not everything at a gala day is railway related!

In 1996 the PMV and brake van arrived from Brighton Railway Museum.  This was just after a point had been laid to connect the two platform roads, and the track extended further south.

The track was later extended to its current limit at Nutaberry Hill Bridge and the level crossing gates were installed at the end of the platforms.

In 2000 the Planet diesel locomotive arrived and, once all relevant permissions were in place, our first train ran on 14th August 2004.

In 2006 the Group was reconstituted as the Bideford Railway Heritage Centre Community Interest Company.

Throughout this period regular gala days were run for the enjoyment of townspeople and holidaymakers, and the signalbox and museum were continually developed as the site's educational element. 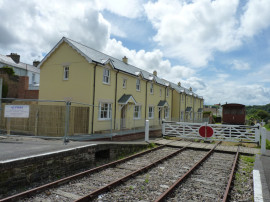 The new houses complement the railway.

During 2010-2011 the site was threatened with housing being built on the trackbed.  This threat was eventually removed and the houses were built adjacent to the trackbed to the design of railway cottages.

In 2019 the Interactive Interpretation Centre, funded by the Heritage Lottery Fund, Bideford Bridge Trust and Bideford Town Council, was opened in the green van.

The cafe, interpretation centre and signalbox are open from 10.30 - 4pm at weekends and school holidays from Easter until the end of October.   When we are not open the site is still accessible from the Tarka Trail.

We've developed a Sales Page on this website where you can buy BRHC booklets and other items, and all those railway books that you've been looking for.  Have a look!