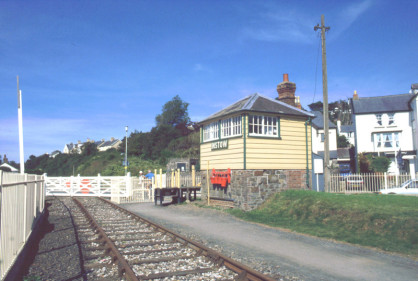 Instow signal box has guarded the road crossing at Instow since 1874. It was built by the London and South-Western Railway and is classified as their Type 1 box. The passenger service through Instow ceased in October 1965, with the line then only used for milk traffic from Torrington and ball clay traffic from Meeth. Rationalisation set in and the signal box only survived because of the busy level crossing and the fact that it was regarded as an operational half way point between Barnstaple and Torrington. The down loop in the station was removed in 1968 together with the small siding, and all signals were dismantled except for the "down home", "up starter", and the two distant signals, the "up" one being the long-lived ex-LSWR lower quadrant arm on a wooden post. In the never-ending quest for manpower savings, BR began replacing conventional level crossings with automatic barriers and flashing lights and, as Instow’s turn loomed, protests arose in the village about possible dangers to elderly people, especially from local residential homes. Nevertheless, conversion work started at the beginning of January 1979, with gates and signals removed and four sets of flashing red and amber lights mounted around the crossing.

However, just three years later in 1982, the freight traffic declined, the line was closed completely and the box was threatened with demolition. The villagers came to the rescue and the Instow Box Emergency Restoration Fund came into being. IBERF managed to persuade the local authority to successfully recommend to the Department of the Environment that the box become a listed building (grade II), thus thwarting any further attempts to demolish it or alter its outward appearance.

With the purchase of the trackbed for what was to become the Tarka Trail, Devon County Council also became owners of the signal box, but immediately showed interest in preserving its heritage. During 1985 contractors lifted the track through Instow and removed the flashing lights, but the section of track across the public highway remained intact with the unsightly yellow box on it being tarred over.  So that is why the signalbox is still with us today. 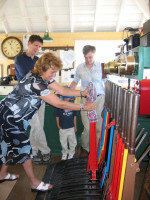 A local Councillor supports our project by pulling a lever in the box.

The box eventually became under the control of BRHC and is opened on occasional Monday mornings during the high season, subject to the availability of volunteers. The interior of the box contains the original lever frame and fittings, which have been reconnected to one of the reinstalled signals. The large wheel that was turned to operate the level crossing gates also remains. The décor of the box is just as it was when the line closed to traffic.

We are currently closed to the public but intend to reopen on a date to be announced towards the end of March.

We will also be starting regular rides on our train on April 10th.  We hope to see you there.  Photo on the Home Page of the newly overhauled and repainted Planet operating at Bideford, with a video on the Gallery page.

The nameplate and numberplate from 34019 "Bideford", purchased by BRHC in March, are now on display at the Burton Museum & Art Gallery until the end of February, in conjunction with an exhibition about how the railways brought holidaymakers to Bideford in the 1950s.

3.  by PayPal, debit or credit card using your surname and DONATION, MEMBER or SALES as a message. (Don't worry that our PayPal access portal uses the word Donate rather than Pay.)