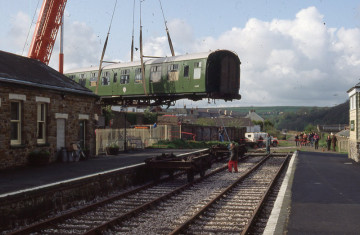 The coach is delivered by crane around the side of the station building.

No.4489 was the first vehicle to arrive on site in 1992.  It was sourced from the Mid-Hants Railway.

It was built at York Carriage Works in 1956 as a second class open vehicle and originally appeared in maroon livery. It’s working life was largely on the Eastern Region (it was numbered E4489) and it was withdrawn at Lowestoft in 1982. It was in standard blue and grey livery by then.

The Mid-Hants Railway purchased a complete rake of coaches from Lowestoft and 4489 was eventually to be painted green and used as the line’s museum coach at Alresford.

The vehicle was purchased with its interior largely stripped out because of its previous use at Alresford.  DCC installed a serving area and four bays of perfectly replicated seating at one end of the vehicle, and the remainder was converted into an interpretative centre for the environmental life of the Tarka Trail. It was opened to the public in 1994 and has served the site well as a cafe since then.  In 2016 we obtained a Heritage Lottery Fund grant and updated the interior of the vehicle as a Visitor Centre for the area. 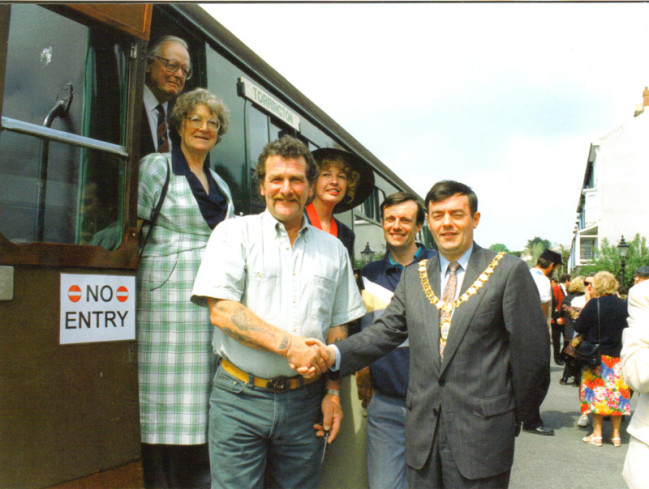 We've just developed a Sales Page on this website where you'll be able to buy BRHC booklets and other items, and all those railway books that you've been looking for.  Have a look!