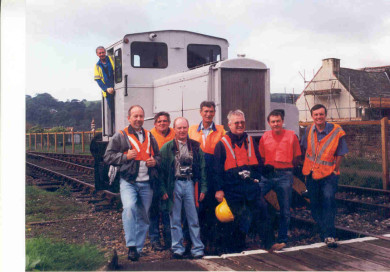 Proud members with their new locomotive just after it had been offloaded at Bideford.

This chain-driven industrial diesel mechanical locomotive was built by F. Hibberd & Co. (see below) in 1957.  It weighs 23 tons and is fitted with a 117 HP Dorman engine and is air-braked.

It was originally sold to Dorman Long & Co. at Dock Street Foundry in Middlesborough. In about 1974 it was acquired by dealer Frank Berry of Leicester, who then sold it on to Vaynor Quarries Ltd for use at their Machen Quarry in Gwent. 1986 saw it pass through dealer Thomas Hill Ltd of Kilnhurst in South Yorkshire, who resold it to British Industrial Sand Ltd at Redhill in Surrey.

It was sold into preservation in 1999 when it was purchased by the Bridgend Valleys Railway along with a sister diesel hydraulic locomotive.  When the BVR decided to standardise on the hydraulic version, 3832 was purchased for use at Bideford. It arrived by lowloader on 14th September 2000.

On 15th August 2004 after repainting into green livery and named "Kingsley", the Planet was to have her claim to fame by hauling the first public passenger train at Bideford since closure.

Major work has recently been carried out on the 6-cylinder diesel engine of the locomotive and she was restarted recently after this work.  She's running extremely well.  She has been repainted in BR black Departmental livery and should be operational for the 2022 season, when we would intend to offer footplate rides.  Watch Latest News for further updates.

F C Hibberd and Co. Ltd was formed in 1927 specifically to build industrial diesel locomotives. In about August 1932 the company acquired the drawings, patents etc. from the liquidator of James and Frederick Howard Ltd of Bedford who had built internal combustion locos from about 1923 to 1931. Hibberd moved to Park Royal in west London in July 1932 and built locos to their own designs as well as those of Howard.

At one time much of the firm's production was exported and orders came from countries as wide apart as Australia and Finland. Also turned out of Park Royal works were many industrial tractors for use on airfields, railway stations and in docks and harbours. These and the railway locos bore the company's 'Planet' trademark.

In 1964 the Park Royal works was closed and all production moved to Butterley Engineering of Ripley, Derbyshire, who had previously absorbed the company. The last loco was constructed in 1968.

Ride in the cab of our diesel locomotive at Bideford station!   First public runs will be given on Sunday 31st October from 1400-1700.  Choose your fantasy destination!    £5 per adult, accompanied by one free child under 16.  Night photography.

Regular rides will start next year.

Photo of the newly repainted Planet on the day the crew passed their exams  is on the Home Page.

The nameplate and numberplate from 34019 "Bideford", purchased by BRHC in March, are now on display at the Burton Museum & Art Gallery until the end of February., in conjunction with an exhibition about how the railways brought holidaymakers to Bideford in the 1950s.

The Bideford site will be open from 1030 to 1600 on each day of October half-term..  Note our cab ride day on October 31st above.  Unfortunately we are  unable to open the cafe at the moment.  We are then closed until Easter 2022.

WANT TO VOLUNTEER WITH US?  Working Parties are held on Wednesdays.

Email enquiries@bidefordrailway.co.uk if you'd like to join us, or just come along at 10.00 a.m..