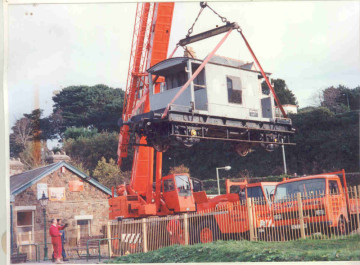 The brake van is craned on to the Bideford site.

This brake van, No.B954757, is typical of many thousands which were once commonplace on Britain’s railway.  Nowadays they are only to be found on heritage railways as the national network has not required brake vans on freight trains for many years.

It was built at Darlington in 1959 and, although a standard BR design, it closely follows the former LNER pattern.  It was one of a later version that had Timken roller bearings.  It would have led a mundane existence until it was withdrawn from service at Ashford in 1983.  It was then acquired by the Brighton Railway Museum and stored at their Preston Park premises and whilst there it was repainted in LNER grey.

In 1995 the vehicle was purchased from Brighton together with the PMV. Both vehicles arrived at Bideford by lowloader on 20th November 1995.

Over the ensuing years it was repainted in a more appropriate bauxite livery and was the subject of an extensive restoration programme before becoming the railway’s passenger carrying vehicle when train services started running on 15th August 2004. 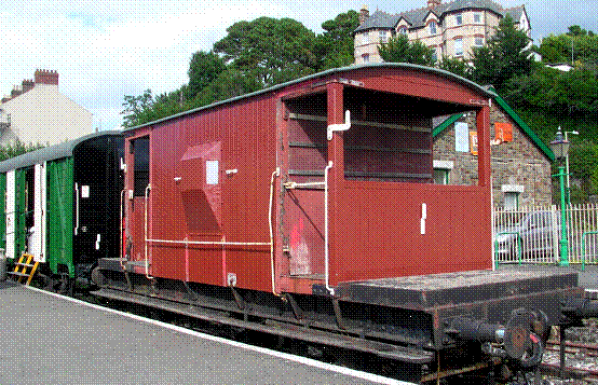 Towards the end of 2019 we received a grant from the Bideford Bridge Trust to  complete the restoration of the vehicle.  The panelling on the west and south sides has already been replaced.  Work will recommence on the east side and structural timbers will be replaced as necessary. Further progress will be reported here in due course.

Ride in the cab of our diesel locomotive at Bideford station!   First public runs will be given on Sunday 31st October from 1400-1700.  Choose your fantasy destination!    £5 per adult, accompanied by one free child under 16.  Night photography.

Regular rides will start next year.

Photo of the newly repainted Planet on the day the crew passed their exams  is on the Home Page.

The nameplate and numberplate from 34019 "Bideford", purchased by BRHC in March, are now on display at the Burton Museum & Art Gallery until the end of February., in conjunction with an exhibition about how the railways brought holidaymakers to Bideford in the 1950s.

The Bideford site will be open from 1030 to 1600 on each day of October half-term..  Note our cab ride day on October 31st above.  Unfortunately we are  unable to open the cafe at the moment.  We are then closed until Easter 2022.

WANT TO VOLUNTEER WITH US?  Working Parties are held on Wednesdays.

Email enquiries@bidefordrailway.co.uk if you'd like to join us, or just come along at 10.00 a.m..