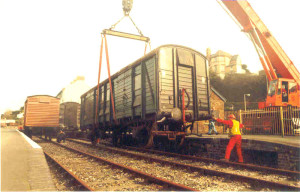 The PMV is lowered on to the tracks at Bideford.

Parcels & Miscellaneous Van No.2142 was built by the Southern Railway at their Lancing Carriage Works in 1942. It was used for mail, luggage, newspapers, milk churns and general light goods traffic. It was vacuum-braked and would therefore often have been used in fast passenger trains.

It was withdrawn by the Southern Region in the 1980s and acquired by Brighton Railway Museum. Following purchase by BRHC, it arrived by lowloader at Bideford with the brake van on 20th November 1995.

The PMV has been completely restored since it arrived onsite.  A major element of this project was the construction of eight new doors and the replacement of a considerable amount of rotten timber.  It is now resplendent in Southern Region green livery. 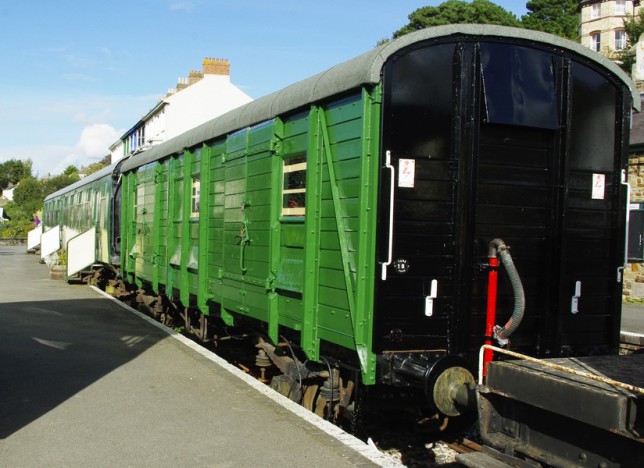 The PMV today in its new role of presenting BRHC's interactive interpretation centre .

We've developed a Sales Page on this website where you can buy BRHC booklets and other items, and all those railway books that you've been looking for.  Have a look!